By Deborah Arthurs for MailOnline

The Queen looked utterly majestic this morning as she arrived at St Paul’s for her thanksgiving service to the sound of pealing cathedral bells and a sea of waving Union flags. Looking delighted by the scenes, beaming as she waved at the sea of smiling faces.

With Prince Philip in hospital received Met by the Lord Mayor, the Queen ascended the steps of the cathedral alone.

For this auspicious occasion, only the second time in history a British royal has celebrated a Diamond Jubilee, the Queen chose another outfit designed by her long-serving in-house couturier, Angela Kelly.

The outfit, one of a succession designed by Ms Kelly for the Jubilee weekend, was made of fine silk tulle, embroidered with tiny mint green star-shaped flowers embellished with silver thread.

The monarch wore her favourite three-string pearl necklace which she matched with pearls at her ears.

On her lapel, she wore a diamond brooch cut from the world’s largest diamond, the Cullinan diamond, which was cut into nine stones. Two of those stones were made into the impressive brooch displayed this summer in an exhibition at Buckingham Palace and worn by the Queen today.

Scroll down for video 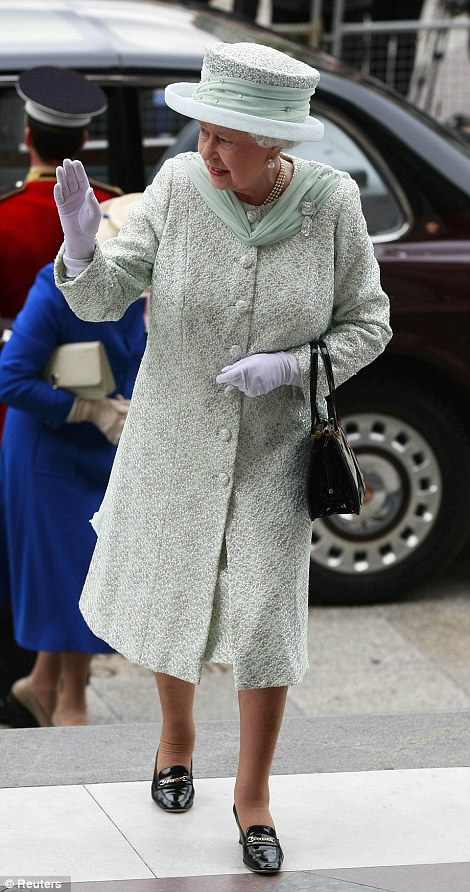 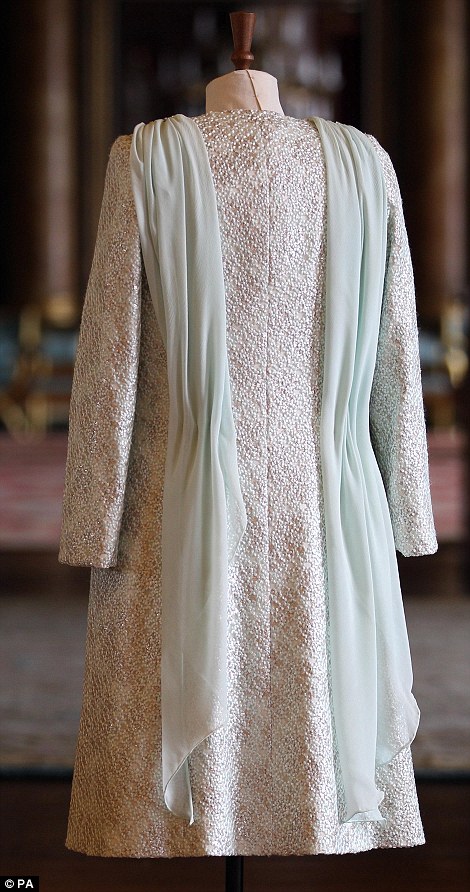 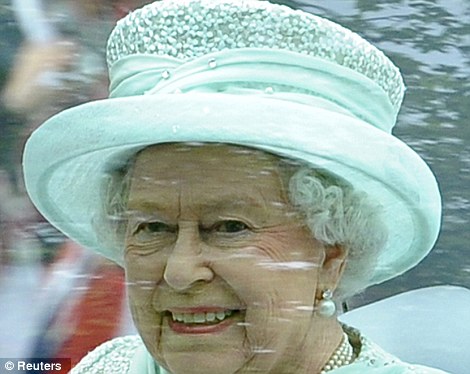 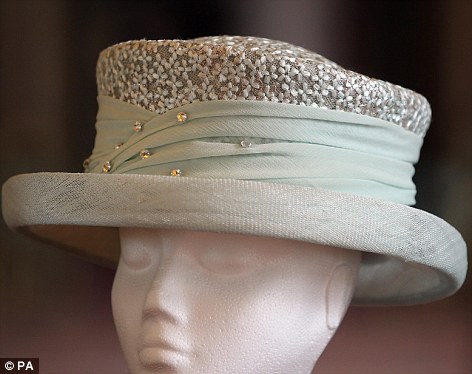 Perfection: The Queen’s glorious green hat was dotted with Swarovski crystals and swathed in layers of tulle to match the trim on her coat

Accompanied in her car by Prince Charles and Camilla, the Queen showed no sign of the emotion she must be feeling at the absence of Prince Philip, who is in hospital receiving treatment for a bladder infection.

Prince Harry travelled in the car along with his father and the Queen, while arriving at St Paul’s just ahead of the Queen were the Duke and Duchess of Cambridge, who waved from the windows of their own car at the enthusiastic throngs.

The Lord Mayor greeted the Queen at the door of St Paul’s, meeting her, as befits tradition, holding a pearl sword.

The rest of the Royal family gathered inside the cathedral from 9.30am this morning as they waited for the Monarch to appear.

Outside St Paul’s, thousands of well-wishers waved Union flags as they waited to greet the Queen today.

Earlier, David and Samantha Cameron made their way into the cathedral, along with with Nick Clegg and his wife Miriam, wearing a fuchsia dress.

The Lord Mayor of London in his full finery was joined by London’s two Sheriffs. 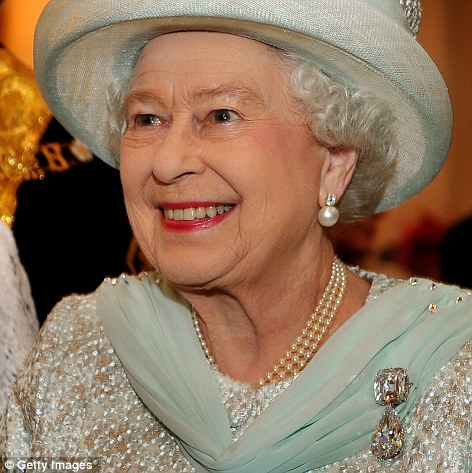 As she attended the final day of Jubilee celebrations the Queen sported an impressive piece from her extensive jewellery collection. Pinned to the lapel of her Angela Kelly-designed outfit was a dazzling brooch, containing gems weighing 94.4 carats and 63.3 carats.

It was crafted from the world’s largest diamond – the Cullinan diamond., which was mined in 1905 in South Africa . Following its discovery it was split into nine stones and two of those were fashioned into the eye-catching accessory. All the items – worn regularly by the Queen over the past six decades – use gems cut from the incomparable Cullinan Diamond. And the priceless collection's history is all the more incredible given the history behind the stone.

When the diamond was discovered, it looked nothing more than a worthless crystal – so much so that the manager of the Premier mine near Pretoria, South Africa, threw it out as rubbish. It was only on closer inspection that staff were persuaded the piece of rock could be a genuine diamond. In fact it turned out to be three times larger than anything discovered before.

Cutting the stone was entrusted to the celebrated firm of IJ Asscher of Amsterdam. It was too large to be cut into a single gem, so cleaving – or sawing – was necessary. The first blow broke the knife and the diamond remained intact. A second attempt split it in two.

Eight months of grinding and polishing followed, with the result of  nine principal numbered stones, 96 small brilliants and nine carats of unpolished fragments. The total weight of the gems cut from the Cullinan was 1,055.8 carats. In 1909 the two largest gems – the biggest colourless and flawless cut diamonds in the world – were formally presented to King Edward VII at Windsor Castle and were eventually set at the head of the Sovereign's Sceptre and in the Imperial State Crown. Both are on display at the Tower of London and will not be in the new exhibition.

The Diamonds: A Jubilee Celebration exhibition will be held from June 30 to July 8 and from July 31 to October 7 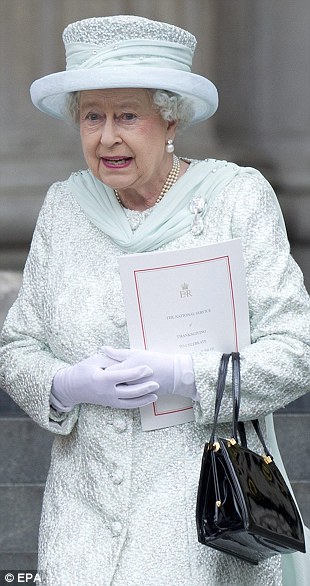 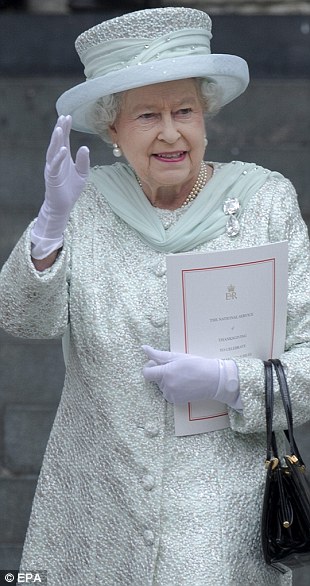 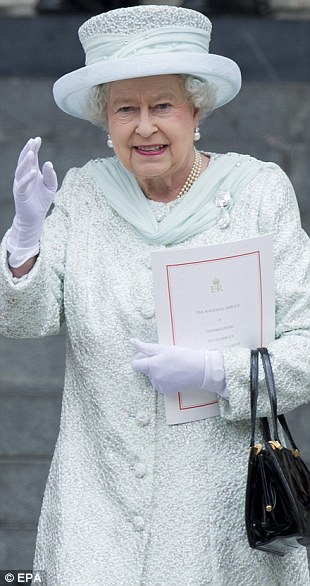 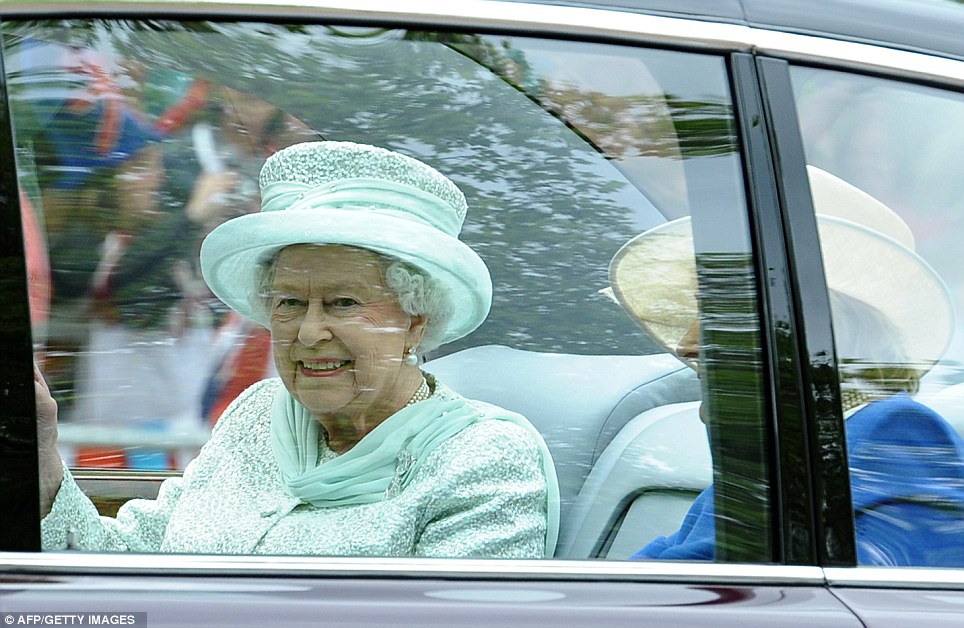 In mint condition: The Queen waves as she arrives in a limousine with one her ladies in waiting, Diana Marion, The Lady Farnham who replaces Prince Philip 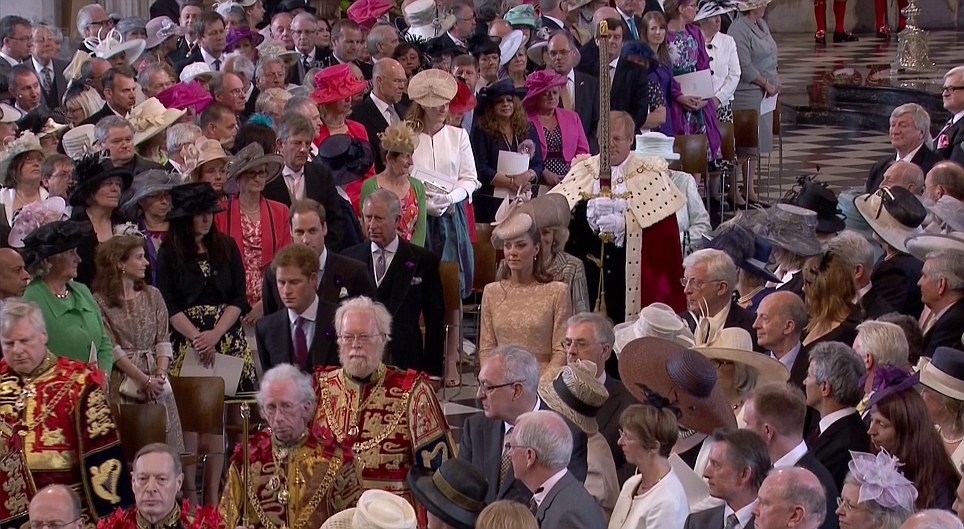 The royal procession: Prince Harry, the Duke and Duchess of Cambridge, Prince Charles, Camilla, and the Queen make their way the length of the cathedral ahead of the service of Thanksgiving 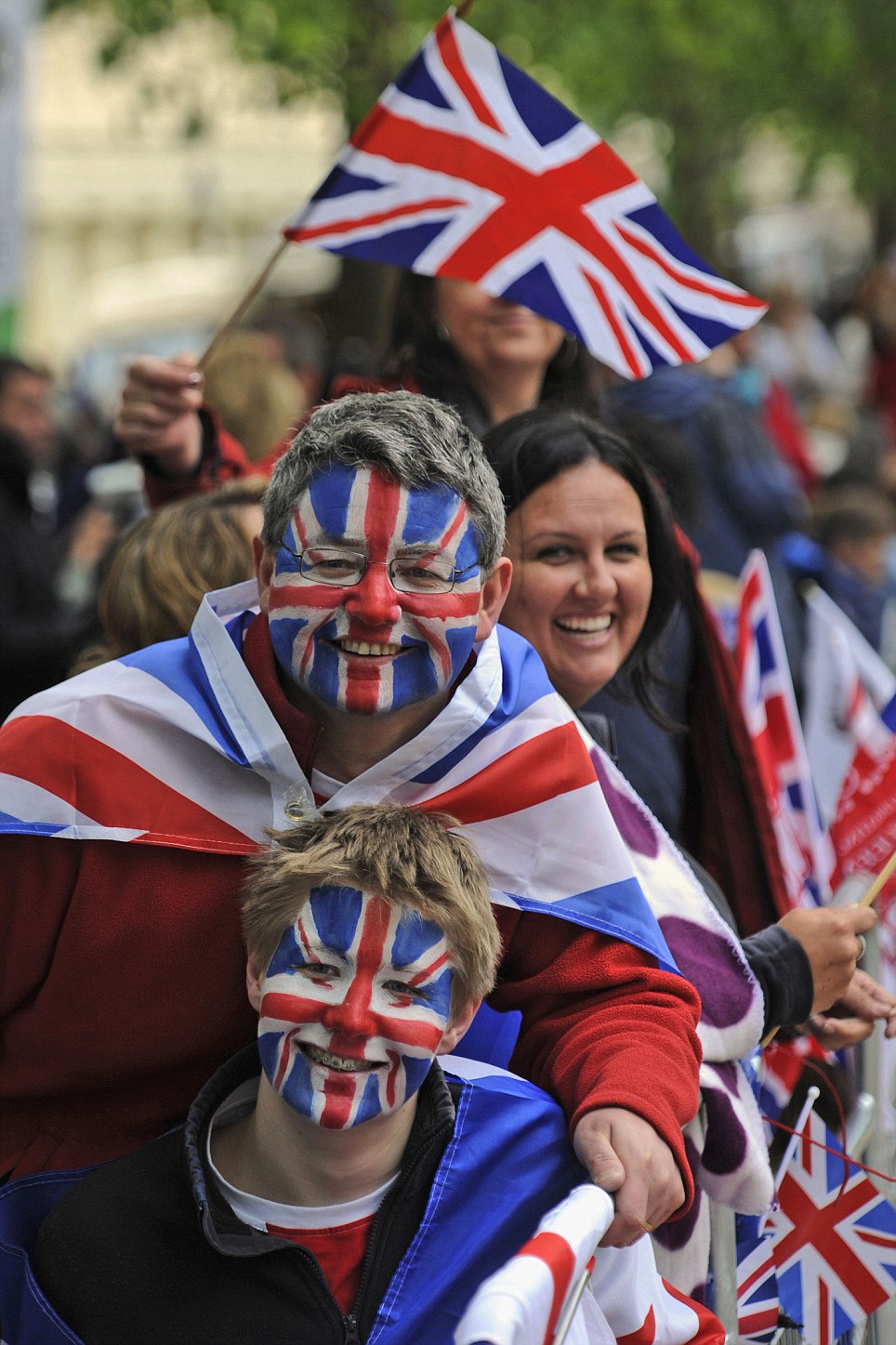 Excitement mounts: Spectators wait outside St Paul’s today to greet the Queen, who will give a thanksgiving speech she wrote yesterday 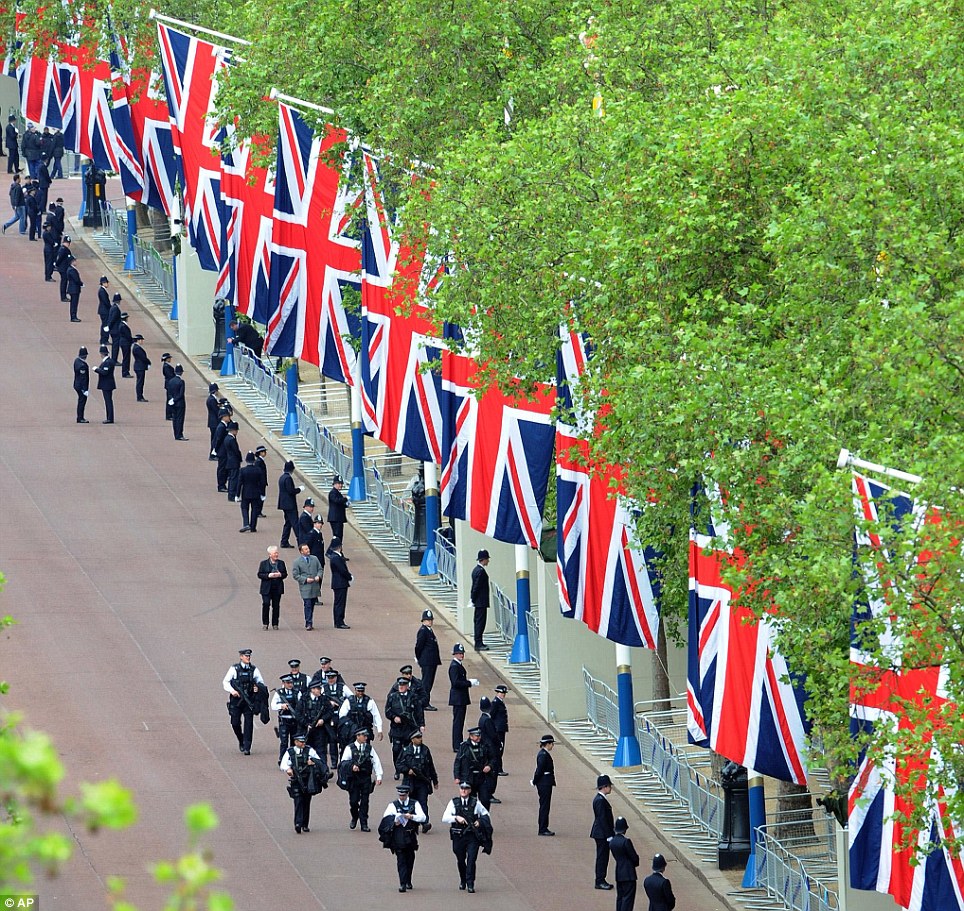 London at its best: The Mall decked out with flags this morning ahead of the thanksgiving service at St Paul’s today

The nation will celebrate the Diamond Jubilee at a service of thanksgiving today, but missing from the Queen’s side will be the Duke of Edinburgh.

The Archbishop of Canterbury, Dr Rowan Williams, will give the sermon at the St Paul’s Cathedral thanksgiving service and is expected to pay tribute to the Queen.

Gathered will be leading national figures and members of the Royal Family including Charles, the Duchess of Cornwall, the Duke and Duchess of Cambridge and Prince Harry.

Prime Minister David Cameron will lead the large representation from the coalition Government and other figures will include governor generals, diplomats and foreign leaders.

After the service the Queen will attend a reception at Mansion House while other senior royals including Charles and Camilla will attend a similar event at the Guildhall. At both events will be members of the thanksgiving congregation.

The Queen and her family will then attend a City of London Livery companies lunch at Westminster Hall – The Livery Companies of the City of London originated in medieval times as Guilds responsible for trade regulation, including checking the quality of goods, weights and measures and training.

Some 700 guests representing the companies' abundant trades and professions, ranging from grocers and gunmakers to fruiterers and fishmongers, will join for the tribute.

A TRIUMPH! LIZ JONES’ FASHION VERDICT ON THE ROYALS TODAY 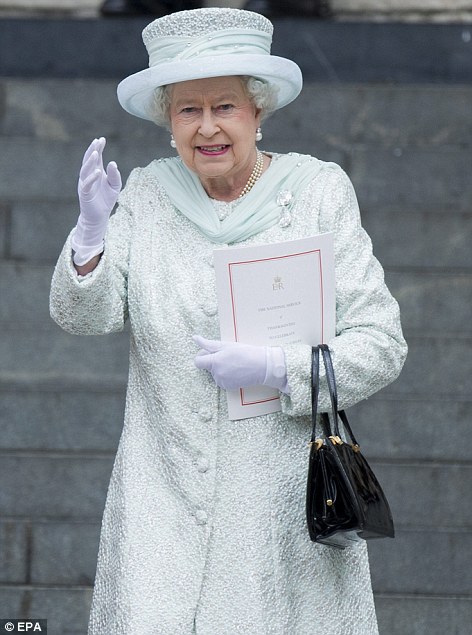 Well, today the boats were well and truly pushed out. For the service at St Paul's the Queen wore a soft mint coat dress: as for the flotilla on Sunday, it is again designed by her dresser, Angela Kelly. It is of silk tulle, embroidered with flowers, using silver thread. A chiffon drape is a lovely, soft touch: it is studded with Swarovski crystals, and a matching drape adorns the hat.

The Duchess of Cambridge's nude lace dress by Sarah Burton for McQueen was tailored perfectly to fit her figure – the hem a tad longer than the red dress for the flotilla on the Thames – and while I loved it, the fastening of the belt, seemingly made from bias binding, is a little disappointing. Kate (and Sarah Burton) need to understand that the Duchess will often be seen from behind, and therefore the detailing needs to be beautiful:  pearls or diamonds, with hand embroidered loops, not just a hook and eye.

And I do want to wrestle Kate out of her platform patent pumps from LK Bennett. She needs delicate lace shoes, encrusted with pearls, by Manolo Blahnik, say, or an English shoe couturier, such as Georgina Goodman. The platform is a little too casual for such a formal occasion. But Kate still looked stunning, especially as her eye make-up has been softened: I love the subtle veil over her eyes, on a hat by her favourite milliner, Jane Taylor: £790, available on the milliner's website.

The real surprise of the day was that both Beatrice and Eugenie looked fresh, young and appropriate. Beatrice wore a blue and white striped coatdress by London Fashion Week designer Kinder Aggugini. Italian born, he studied at St Martin's, and learned his craft on Savile Row and working for designers including Vivienne Westwood and John Galliano.

This dress was teamed with tan stilettos by Gina, a Stephen Jones hat and a Lemaresca bag, made by sisters Giulia and Cecilia Maresca, who worked at Tod's and Vivienne Westwood before striking out on their own. This rock and roll bag label is made from start to finish in Italy, not merely 'finished' there, as so many are these days. This bag would have cost about £1,000.

Princess Eugenie chose a royal purple dress by Suzannah (her lovely, small boutique is at 6 Bristol Gardens, in Little Venice); a Stephen Jones hat; Gina nude stilettos and a Loro Piana bag. I am starting to love these two young women: they champion brand new talent, know how to mix and match different labels, and have the good sense to wear Gina shoes, which are expensive but super stylish and comfy. Kate should follow suit, and abandon those high street platforms. She has such great legs: she really could take a dagger heel.

Samantha Cameron wore a rose print dress by Paul Smith that we've seen before, but at least she wore a hat, by Stephen Jones. The Duchess of Cornwall wore a graphic, basket weave coat by Bruce Oldfield, and a ginormous Philip Treacy hat. Both items tell me she is feeling much more confident, starting to abandon those safe creams. All in all, a triumph.

VIDEO: Key moments from the Service of Thanksgiving at St Paul’s Cathedral

Majestic Queen looks mint in crystal-studded coat and dress designed by long-serving couturier Angela Kelly have 2324 words, post on www.dailymail.co.uk at June 5, 2012. This is cached page on World News. If you want remove this page, please contact us.