Where there are elections, there are bound to be election posters. Mushrooming overnight, they line streets and squares for weeks, often in the run-up to elections both at state and federal levels in Germany. Very few are actually attractive. But they can be effective if they get their message across.

“A poster can hold the gaze of hurrying passers-by or drivers for three to four seconds,” explains Frank Brettschneider, a communications scientist at the University of Hohenheim. “So, it has to be good.”

Klaus Staeck, Germany’s most prominent poster artist, for example is an ace at creating effective posters. Many of his works hang in museums today, including provocative pieces. For instance, Staeck produced a poster in collaboration with Greenpeace in 1988 that featured profile pictures of two chemical industry bigwigs with the tagline, “Everyone’s talking about the climate, we’re ruining it.” The industries in question were pharmaceutical giants Hoechst AG and Kali Chemie AG, whose factories produced environmentally harmful greenhouse gases back then. 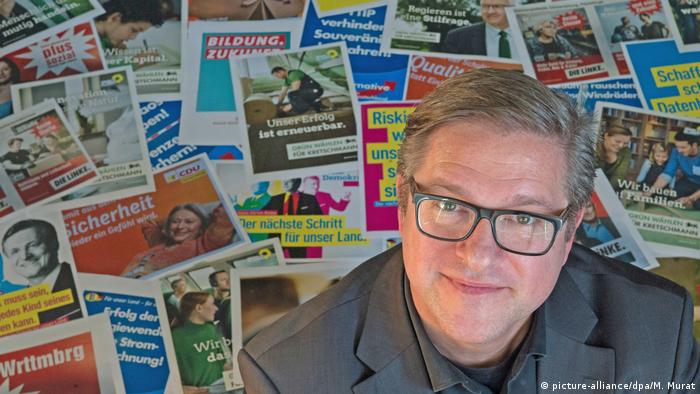 Greenpeace plastered these posters all over Germany, and both the men who were pictured took them to court seeking to stop the publication of the poster insofar as it showed their pictures and names. Nine years later, the Federal Constitutional Court decided in favor of Greenpeace’s claim of freedom of expression.

Mix of satire and irony

Many of Staeck’s slogans and ideas are still being copied, even in regular election campaigns. That’s because Staeck’s proven recipe for success is a mix of satire and irony, with a hint of protest. “I always plan for the risk of being misunderstood,” says the 83-year-old law graduate with a wink. He has been involved in 41 legal proceedings in his career as an artist.

But Staeck, an avowed Social Democrat and former president of the Academy of Arts in Berlin from 2006 to 2015, has never allowed himself to be harnessed to any party cart, not even to that of his beloved Social Democratic Party (SPD).

In 1972, he created a poster that screamed, “German workers — the SPD wants to take away your villas in Ticino!” Staeck said he wanted to provoke people with this absurd exaggeration. The Social Democrats were astonished. A supporter accosted him at a later event and demanded, “Name me one worker who owns a villa!” 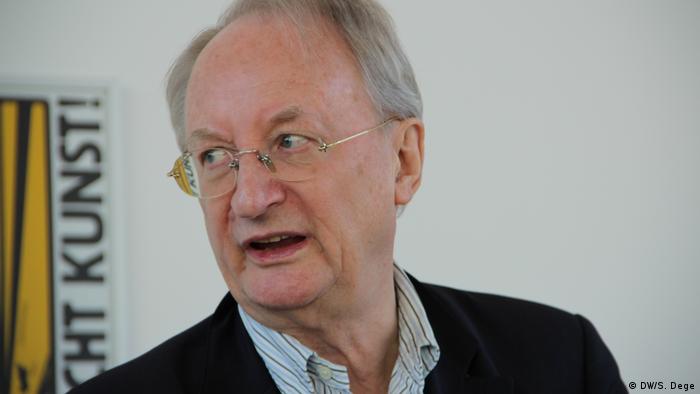 Times have changed. Today, the SPD is struggling to win over lost voters, and Olaf Scholz, the party’s candidate for chancellor, is supposed to win them over and away from Christian Lindner, the party leader of the Free Democratic Party (FDP).

Brettschneider, the communications professional, divides the parties’ election posters into two large groups. Both the SPD and FDP have people-oriented posters with frontmen performing well in the polls. On the other hand, the Christian Democratic Union (CDU) and the Green Party have issue-oriented posters, probably to compensate for their hapless chancellor candidates , Armin Laschet and Annalena Baerbock. “Laschet is costing the CDU/CSU votes, so they are putting more emphasis on party issues,” explains Brettschneider.

Scientists have concluded that a billboard only conveys its message in the blink of an eye if it is focused, not overloaded, and uses a legible, high-contrast font. Brettschneider, however, believes that it is more important for the person in the poster to be recognizable. The parties are currently succeeding “quite well in terms of design,” he says. 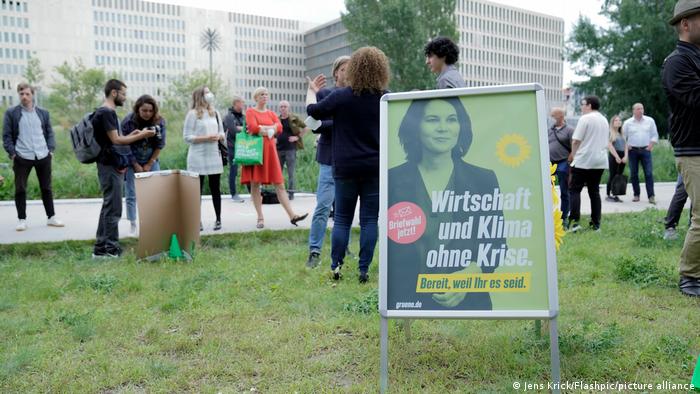 In this sense, today’s posters aren’t all that different from their predecessors. Even the billboard for the constitutional National Assembly in 1919 was succinct: “Order, peace, freedom,” promised the German Democratic Party, a year after Germany’s defeat in WWI. The poster shows a female figure shaking her iron fist at the demons of the past. “Who will save Prussia from ruin?” asked the German National People’s Party. “Equal rights, equal duties” for men and women, the Social Democrats had urged.

Coming back to the present, where is the line between propaganda and election advertising? “Nothing is protected from misuse. Advertising is everything, from political agitation to consumer advertising,” says Klaus Staeck.

“A poster is neither a book nor a party platform,” explains communications professional Brettschneider, adding that a strong image has more impact than a good slogan. 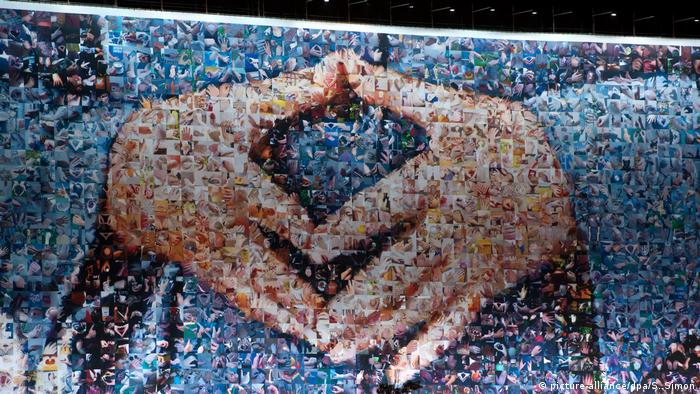 “Eye-tracking analyses in the lab confirm that posters with images attract more attention than those with text. So, a picture is worth a thousand words in election advertising too.”

A perusal of poster history underscores this. Poster-like material was already used in ancient times to communicate messages to the public, for example in market squares or in front of churches or townhouses. The characters and symbols on engraved stones in ancient Egypt are considered to be the earliest form of posters.

The invention of modern letterpress printing by German inventor and publisher Johannes Gutenberg (1400-1468) in the mid-15th century, and the discovery of lithography by the German actor and playwright Alois Senefelder (1771-1834) enabled the production of posters in larger numbers.

The advance of poster art

However, poster lithography did not begin its triumphant advance until around 1860 from England. French artists discovered the genre for themselves, above all Henri Toulouse-Lautrec (1864-1901), a grand master of poster art alongside colleagues such as Theophile-Alexandre Steinlen or Eugene Grasset. Jules Cheret (1836-1932), also a Frenchman, designed more than 1,000 posters and was at one time crowned “the king of the poster.”

The artistic poster established itself relatively late in Germany, though. This would soon change thanks to the Expressionist artists’ association “Die Brücke” or The Bridge comprising of members such as Oskar Kokoschka, Ernst Ludwig Kirchner or Erich Heckel and the magazine “Der Sturm” (The Storm) published in Berlin by Herwarth Walden.

Russian avant-garde artists also contributed a particularly exciting chapter to poster art history. In a brief phase between the mid-1920s and the early 1930s, they designed film posters for which they used novel cinematographic techniques: extreme close-ups, special angles, and dramatic proportions. Human faces were bathed in garish colors, body outlines were elongated or distorted, and people were spliced with animal bodies.

Today, posters are coveted collector’s items. The works of many important German poster artists like Alfons M. Mucha, Ludwig Hohlwein and Klaus Staeck are exhibited for instance at the Folkwang Museum in Essen, the Brandenburg State Museum of Modern Art, and even in the Garden Museum in Erfurt. 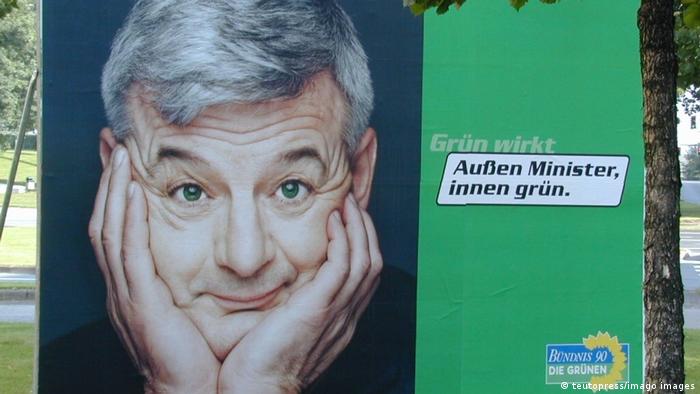 The combination of images and words has always been effective. One legendary election poster of 2002 had former German Foreign Minister and Green party politician, Joschka Fischer, looking amused into the camera.

In a clever play of just four German words it translates to, “Minister on the outside, green on the inside” – the German word “aussen” meaning both “outside” and “foreign” in this context. Copies of this poster hang in the Living Museum Online of the German House of History, the German Historical Museum, and the German Federal Archives.

But isn’t a poster vying for attention by a roadside somewhat misplaced, especially in the age of the Internet and social media? “Quite the opposite,” says Frank Brettschneider. Research on the recent state elections in Baden-Württemberg has revealed some surprising results. On the one hand, election posters are the campaign tool that attracts the most attention. On the other hand, they are used especially by younger people, even those who are on image-driven social media channels such as Instragram or YouTube. This should be welcome news to all parties.

Election posters in Germany: Underrated eye-catchers have 1518 words, post on www.dw.com at January 11, 2021. This is cached page on World News. If you want remove this page, please contact us.