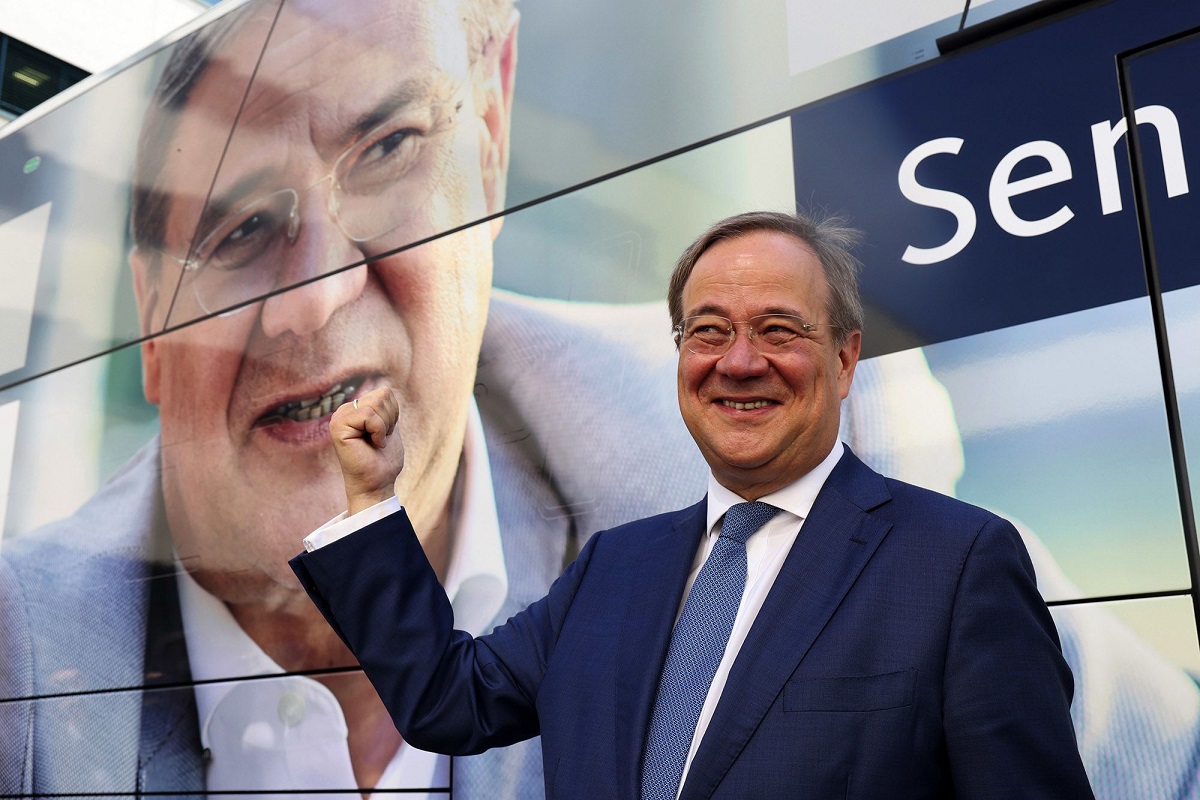 BERLIN (Aug 14): At a campaign stop outside a picturesque market town in Saxony, Armin Laschet was faced with a very delicate political dilemma for a German politician: what to put on his bratwurst.

With cameras clicking, the faltering favourite to replace Angela Merkel as chancellor hesitated before picking ketchup, while a local ally from his Christian Democratic party subtly noted Saxony's custom was to take mustard.

"Oh, I thought the mustard was mayonnaise," Laschet said, inadvertently disparaging the local condiment and providing the latest example of his struggles to make headway on the campaign trail.

His next faux pas followed on Friday. During a meeting at Tesla Inc.'s unfinished factory outside Berlin, Laschet asked Elon Musk whether hydrogen could be the automobile industry's future. The Tesla boss, who is investing in the plant to build electric cars, chuckled and dismissed the idea as a "waste of time."

In six weeks, Germany will elect a new leader after 16 years under Merkel. The race is a toss up, and Laschet is at the heart of the unpredictability.

"Never since 1949 has a federal German election been so open," Manfred Guellner, head of the Forsa polling institute, said in a phone interview. "If the CDU-led bloc still wants to win, it would basically have to replace its candidate."

Three parties — Laschet's conservative bloc, the Social Democrats and the Greens — have a legitimate shot at the chancellery. To gain power, messy and unstable three-way coalitions will likely be needed with loyalties split between six parties. Despite running Germany's strongest political force, the 60-year-old CDU chief — who's ruling out tax increases and promises a quick return to frugal spending policies — appears bumbling and unsteady on the campaign trail. After causing an uproar by laughing during a visit to flood victims last month, a press conference in front of a trash heap was mocked. He similarly looked out of place by entering a boxing ring in a suit.

While the CDU-led conservatives are still ahead in the polls, their lead is shrinking — down to one percentage point in a recent survey — and pressure is growing on Laschet to turn things around.

Daniel Guenther, the Christian Democratic premier of the northern state of Schleswig-Holstein openly criticized his party's leader, saying in an interview with the Handelsblatt newspaper that Laschet's campaign style "doesn't convince anybody."

The Social Democratic candidate is gaining momentum and can point to his role protecting Europe's largest economy by unleashing billions of euros in aid to secure jobs and support businesses. Through his personal popularity, Scholz has slowly been able to reverse his center-left party's slide. It now has almost as much voter appeal as the conservatives. German elections aren't straight forward. People often split their ballots or vote tactically. In recent state elections in the former communist East, many mainstream voters pushed aside personal leanings to back the regional incumbent party in order to thwart the far-right Alternative for Germany from becoming the strongest force.

CDU strategists now regret focusing so much attention on the Greens and their candidate Annalena Baerbock, who burst out of the gates after her nomination in April, according to a person familiar with the campaign's thinking. In the coming weeks, tactics will shift, and Laschet will step up attacks on the SPD, said the person, who asked not to be identified because the discussions are confidential.

Laschet will be hoping for a lift when Merkel, who has vowed to keep out of the election, participates in a CDU event on Aug 21 in Berlin, which is supposed to sound the bell for the hot phase of the campaign.

The proximity to the chancellor, who remains Germany's most popular politician, could bolster his image at a critical time. Laschet has repeatedly asked Merkel for advice and will be happy to see her at other events, even though he's careful not to get caught in her shadow, the person said.

Despite his current struggles, Laschet's still has strong chances to become Germany's next chancellor, and he's shown he can fight back from adversity. In the 2017 election in North Rhine-Westphalia, he managed to win the traditionally Social Democratic state.

To see off the challenge from the popular Soeder, Laschet refused to back down and secured the backing of a majority of conservative grandees. While initially damaged by the power struggle, he stabilized his campaign after the Greens had briefly surged ahead in the polls.

For now, he's staying true to his moderate approach and refraining from mud-slinging.

"We campaign for us and our ideas. I'll stick with this strategy," he said during his campaign stop in the Saxony town of Torgau. "I'm sure we will win this election in the end."

In the coming weeks, Laschet will criss-cross Germany in an attempt to boost his popularity. But under the pandemic restrictions, live events reach only a small number.

In Torgau, about 20 people watched from a distance as Laschet visited a monument commemorating the role of Soviet and American forces in defeating the Nazis. At a visit to a chip factory in Dresden earlier in the day, there was no public audience.

Images of him with Musk and viewing semiconductor equipment are supposed to support his main message, which is that Germany needs a "decade of modernization." But it's a message that doesn't fit well for a conservative politician who has done little to move his home state away from a reliance on heavy industry, and he still needs to recover from gaffes.

"You can learn from every crisis," Laschet said during a campaign stop this week. "A crisis can also be a turning point." While he was referring to the damage caused by historic flooding, he might as well have been talking about his own campaign.

Merkel’s faltering heir upends Germany’s election predictability have 1183 words, post on www.theedgemarkets.com at August 14, 2021. This is cached page on World News. If you want remove this page, please contact us.