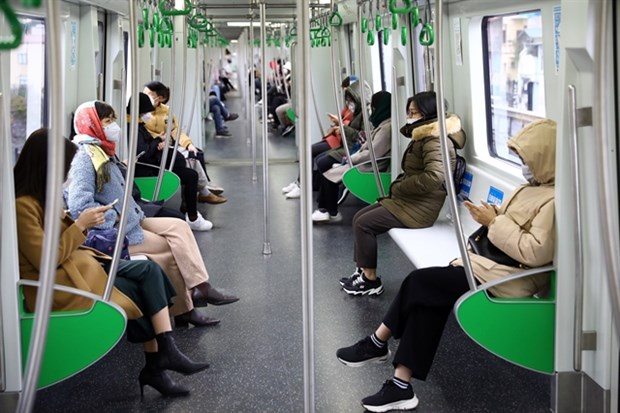 Hanoi (VNS/VNA) – Statistics from Hanoi Metro company show that, from its first day of commercial operation in November last year to May 26, more than 3.1 million passengers have used the Cat Linh-Ha Dong 2A line .

During holidays, this average figure goes as high as 40,000. During the May 1 holiday, more than 50,000 passengers used the service.

According to Hanoi Metro general director Vu Hong Tuong, the number of people using the railway line has increased 2.5 times compared to when the service first opened, when social distancing rules were stricter.

The train is on schedule 99.98 percent of the time. Daily passengers with a monthly pass account for up to 60 percent of travellers, and up to 80 percent during rush hours.

Explaining the reason behind the increase in numbers, Tuong said that people have seen the railway line as convenient, stable, and unaffected by traffic jams, which will gradually form a metro culture.

People using the train have become more accepting of walking a long distance to get to the stations. After boarding the metro line, they can then transfer to connecting buses at these stops.

As the pandemic is brought under control and activities returned to normal, such as children returning to school, combined with rising fuel prices, metro travel demand has increased.

Tuong said that the railway had brought positive initial results, contributing to reducing road congestion along the route during rush hours. The current state of operation is the best scenario that Hanoi Metro has prepared for.

There are now 54 bus lines connected to the Cat Linh-Ha Dong urban elevated railway, with 16 lines at each of the two ends of the railway line, and eight to nine lines at intermediate stations.

Hanoi Metro has also put up boards detailing the bus route system at the metro stations to inform passengers./.

More than three million passengers have travelled the Hanoi Metro have 384 words, post on en.vietnamplus.vn at June 1, 2022. This is cached page on World News. If you want remove this page, please contact us.