From Florence Pugh to Gisele Bündchen to Chris Pratt and everyone in between: Hollywood stars are faced with pressure to not only perform at high levels, but also attain steep standards of beauty to land the role of their dreams and make it big in the industry.

Pugh, 26, remembered the beginning of her career a little over a decade ago when she was made to feel like she’d made a “massive mistake” pursuing acting after the British actress was told to lose weight for a TV spot in the U.S.

The “Don’t Worry Darling” star was new to the world of drama having only starred in one movie aside from a few theater productions while in primary school.

Pugh flew to the United States for an audition on a television show , and was cast in a failed pilot for “Studio City” when she was 19 years old which also starred Heather Graham and Eric McCormack, according to IMDb. Shortly after receiving the role of an aspiring musician, she recalled executives wanting her to switch up her look.

Florence Pugh, Gisele Bündchen and Jennifer Aniston have each faced criticism from Hollywood to change their looks. (Getty Images)

She had preconceived notions about the industry from working on her first film, “The Falling” in 2014 with Maisie Williams , and said, “I’d thought the film business would be like ‘The Falling,’ but actually, this was what the top of the game looked like, and I felt I’d made a massive mistake.”

Gisele Bündchen may be known as one of the world’s most famous fashion models of all time, but her start in front of the camera came at a price to her self-confidence.

“I remember some people telling me my nose was too big or my eyes were too small, that I could never be on a magazine cover,” she told People magazine in 2016. “It wasn't easy to be 14 and hear that kind of criticism. It made me feel insecure.”

The Brazilian supermodel, who recently finalized her divorce from ex-husband Tom Brady, confided in her family for advice.

Gisele Bündchen was discovered in a mall when she was 14, and became one of the world’s most famous supermodels. (Victor VIRGILE/Gamma-Rapho)

“I remember some people telling me my nose was too big or my eyes were too small, that I could never be on a magazine cover,”

“I told my dad, and he said, 'Next time, tell them, I have a big nose and that comes with a big personality,'” she said. “At that point I felt, if I kept working hard and giving my best, it would all work out.”

Gisele remembered being discovered as a teen and having to bunk with eight other girls while trying to make it as a model.

“I already felt weird because I was taller and looked more mature then most girls my age,” she said. “I just knew that I wanted to do my best and see if I could make it.”

The former Victoria’s Secret stunner announced her retirement from the runway in 2015. Forbes listed her as the highest-paid model in the world from 2002-2017, and in the last year alone, she reportedly earned an estimated $47 million.

Bündchen was a Victoria’s Secret Angel from 1999 until 2006, and walked in the famed fashion show for years. (Kevin Mazur)

Jennifer Aniston was told to lose weight if she wanted to find success in the entertainment industry. (Amy Sussman)

“This is true of young audiences in particular, who have finely tuned BS detectors. When people choose their own unconventional but carefully considered looks or monikers to better embody who they are as entertainers or activists—Pink and Lady GaGa come to mind—it only enhances their authenticity and relatability.”

Jennifer Aniston was reportedly told she “had to lose 30lbs if she wanted to stay in Hollywood” just before she landed the iconic role of Rachel Green on “Friends.”

“My agent gave it to me straight,” she told “Rolling Stone” in 1996. “Nicest thing he ever did … The disgusting thing of Hollywood – I wasn’t getting lots of jobs ’cause I was too heavy.”

But the discussions about her body helped her change her mindset and follow a healthier diet.

“I was like, ‘What?!’ But my diet was terrible,” she said. “Milk shakes and French fries with gravy. It was a good thing to start paying attention.”

Priyanka Chopra Jonas detailed a lengthy list of physical changes handed down to her at the behest of a director offering advice on how she would be able to transition from a Bollywood star to a member of the Hollywood elite in her 2021 memoir, “Unfinished.”

Priyanka Chopra said her own manager once supported a director’s request for the actress to change her body with plastic surgery. (Miikka Skaffari/FilmMagic) 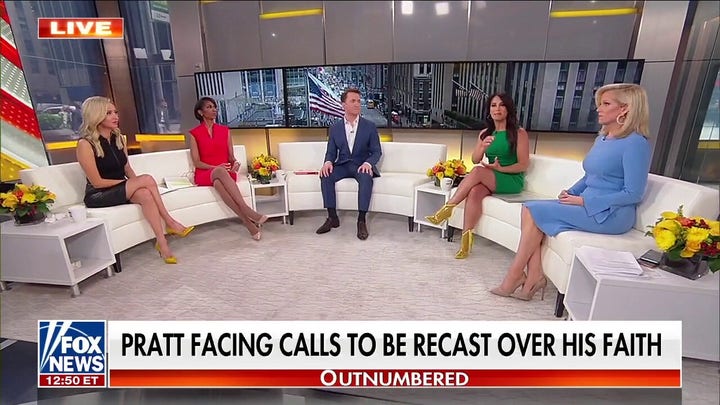 “After a few minutes of small talk, the director/producer told me to stand up and twirl for him,” she wrote. “I did. He stared at me long and hard, assessing me, and then suggested that I get a boob job, fix my jaw, and add a little more cushioning to my butt.”

Not only did the un-named exec suggest an enormous amount of changes, but Priyanka’s team also co-signed.

“If I wanted to be an actress, he said, I’d need to have my proportions ‘fixed,’ and he knew a great doctor in L.A. he could send me to,” she added. “My then-manager voiced his agreement with the assessment.”

Chris Pratt used to weigh 300 lbs. while starring as Andy Dwyer on “Parks and Recreation,” and once told Men’s Health UK that he was “impotent, fatigued and emotionally depressed” while overweight.

His perspective on body image changed when he started working out for his role in “Zero Dark Thirty” in 2012, and he became a bona fide gym-rat before his Marvel debut in “Guardians of the Galaxy” in 2014.

Chris Pratt reached more than 300 lbs. while playing Andy on “Parks and Recreation,” but shed the weight to play a superhero. (Jon Kopaloff)

“It's nice to know that there's something I can do, that I can manipulate the way I look — that's a good thing for an actor to be able to do.”

Jennifer Lopez once fired a manager who told her she needed to lose weight. (Jamie McCarthy)

“It's nice to know that there's something I can do, that I can manipulate the way I look — that's a good thing for an actor to be able to do.”

The “Jurassic World” star joked that he now feels “totally objectified,” and added, “I think it’s OK, I don’t feel appalled by it.”

He doubled-down on the double standard, adding, “I think it's appalling that for a long time only women were objectified, but I think if we really want to advocate for equality, it's important to even things out. Not objectify women less, but objectify men just as often as we objectify women.

“There are a lot of women who got careers out of it, and I'm using it to my advantage. And at the end of the day, our bodies are objects.”

Jennifer Lopez once fired a manager who said she needed to lose wight.

Ben Affleck’s new wife told Glamour in 2011, “I was just so infuriated that somebody said you couldn’t have a little extra meat on you—because I was by no means fat! That was so mean and closed-minded.”

She added: “I was like: ‘No, this is who I am and this is the type of woman that I grew up with, and it’s beautiful. There’s no reason to be anybody but myself.'”

“I would end up leaving with this pit in my stomach, knowing that I was so much more than what was being objectified on the stage.”

Meghan Markle recalled feeling “objectified” while working as a briefcase girl on “Deal or No Deal” more than 15 years ago.

Markle, 41, recently sparked backlash after a discussion on her “Archetypes” podcast with Paris Hilton where she admitted to having a difficult time working a job based on her looks when she had previously spent years studying international relations.

“I was thankful for the job but not for how it made me feel. Which was … not smart. And by the way, I was surrounded by smart women on that stage with me,” the Duchess of Sussex said. “But that wasn't the focus of why we were there. And I would end up leaving with this pit in my stomach, knowing that I was so much more than what was being objectified on the stage.”

In an essay published for Darling magazine in 2018, Markle described more of the criticism she faced in front of the camera as one of the stars of “Suits.”

“I was in my early 20s, still figuring so much out, and trying to find my value in an industry that judges you on everything that you’re not versus everything that you are,” she wrote. “Not thin enough, not pretty enough, not ethnic enough, while also being too thin, too ethnic, too pretty the very next day.”

Florence Pugh, Gisele Bündchen, Jennifer Aniston and more stars told to change their looks for Hollywood glory have 2013 words, post on www.foxnews.com at November 1, 2022. This is cached page on World News. If you want remove this page, please contact us.